Home » Uncategories » Ration Card From Name Removed & Repeat This Simple Process, know what to do 2020

Ration Card From Name Removed & Repeat This Simple Process, know what to do 2020

Join Telegram Channel
Ration Card From Name Removed & Repeat This Simple Process, know what to do 2020Ration card has been canceled or your name has been removed from the list, don't worry now, because the Modi government is going to solve the problem of such people. The names of some people have been cut off in the process of making new ration cards by the state governments. Anyone whose name has been removed from the list can now add it again. For some reason your name is cut off from the ration card. For example, if your name is already attached to another ration card, Aadhaar number is not attached to your ration card etc. But now you can apply for this and create a ration card. You can also add the name of the wife or child after marriag 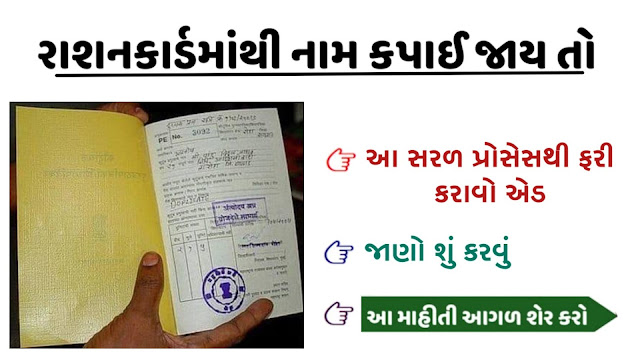 ◆ This is how to create a ration card when the name is deleted
The Central Government has implemented One Nation One Ration Card portability facility across the country. So far 26 States and Union Territories have been covered in this facility. Through this facility, customers will now be able to get rations in other states as well. This person no longer needs to be a resident of that state. With this decision of the Central Government, the people of the country can now easily get rations in any state

● If Aadhaar card number is not linked with your ration card

● Even if the eldest member of your household has died, the name can be removed from the ration card

◆ This way you can add your name to the ration card again
If a person's name has been cut off from the ration card, he can add his name by going to the nearest CSC center or public facility center by taking a photocopy of the Aadhaar card and the ration card to which his name is to be added. After submitting the receipt you will get from there, the name of that person will be added in the ration card

To read in Gujarati

◆ Disclaimer
➠ We are not the official partner of Government or linked with any way with government.
➠ We just provide information to user which are available in public domain.
➠ All the information and website link are available in public domain and can be used by user. We do not own any website available in app.
➠ Application is developed as a public service to help Indian residents to find and manage their digital service in their area.
➠ People use app for personal information purpose only. Application is not affiliated withany government services or person
Share on Facebook
Share on Twitter
Share on Google+
Share on LinkedIn

0 Response to "Ration Card From Name Removed & Repeat This Simple Process, know what to do 2020"