Home » Uncategories » From this date, ST buses will run in all the villages of Gujarat, know the full details

From this date, ST buses will run in all the villages of Gujarat, know the full details

Join Telegram Channel
From this date, ST buses will run in all the villages of Gujarat, know the full details

Gujarat State Road Transport Corporation (GSRTC) is a passenger transport organization. Which provides bus services in Gujarat and neighboring states. GSRTC was established on 1st May 1960 in Gujarat. Initially there was a fleet of 1767 buses. There are currently 8703 bus numbers and more than 39795 employees working. 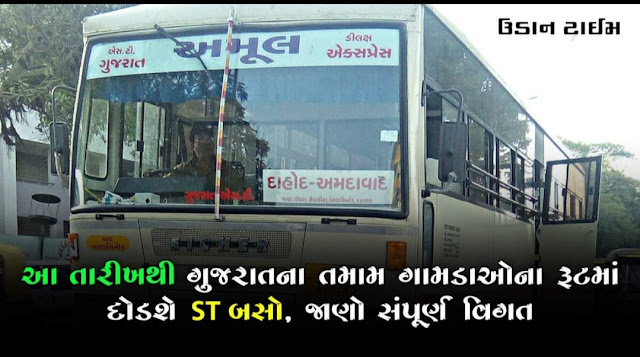 In view of the Corona epidemic, the Gujarat government will now run all government buses on village routes again as per the new guideline. All traffic in Gujarat was halted due to Corona. Gujarat ST Corporation has taken an important decision in the fourth lockdown after completing 3 lockdowns in the state. This decision has brought happiness to the passengers.

Such a beneficial decision has been taken by the government to solve the problem of passengers. Passengers face many difficulties during this time. In view of such matters, the government has taken a decision regarding such transport.

According to the ST Department of the Government of Gujarat:

According to the ST department of Gujarat, government buses used to make about 23,500 round trips throughout the day. Now running in the villages, government buses will carry more than 32000 rounds during the day.

Thus, most of the ST buses have been started. The government has decided to run government buses in all the areas except those which have been quarantined due to corona. The important thing is that people should take special care not to travel unnecessarily due to this corona epidemic. And travel should be avoided until done. So that the epidemic of corona can be avoided and kept safe.
Share on Facebook
Share on Twitter
Share on Google+
Share on LinkedIn

0 Response to "From this date, ST buses will run in all the villages of Gujarat, know the full details"