Following the devastation caused by rains in Gujarat, the state government has announced compensation to farmers. Deputy Chief Minister Nitin Patel made the announcement 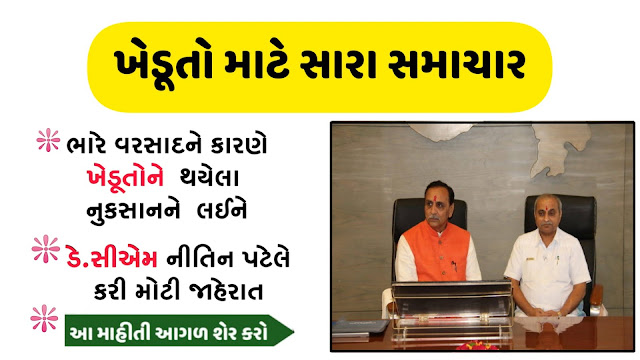 ◆ Damage from rain will be compensated

◆ Assistance will be provided by the State and Central Governments

It is raining incessantly in Gujarat. Which is causing loss to the farmers. In this regard, Deputy Chief Minister Nitin Patel said that there was good rain in the state at the beginning. The latter, however, suffered heavy losses due to heavy rains. It will be compensated. The damage to the farmers will be surveyed and assistance will be provided by the state and central government according to the damage

◆ 120 per cent average rainfall in the state so far

The state has received incessant rains. The state has received an average rainfall of 120 per cent so far. Kutch is receiving an average rainfall of 251.66 per cent. The relief commissioner then kept on informing that the situation in the state was under complete control. There are 13 teams of NDRF and 2 teams of SDRF deployed in the state. While the other 11 teams of NDRF-SDRF are on standby. In addition, 154 reservoirs in the state are on high alert. While 12 reservoirs are on alert and 12 reservoirs are on warning. Continuous rains have overflowed 62 rivers and 78 large lakes in the state

We value the hard work of farmers and believe that they deserve better outcomes then they are getting in the current time.