Excerpts 7 and 12 were separated in the revenue record 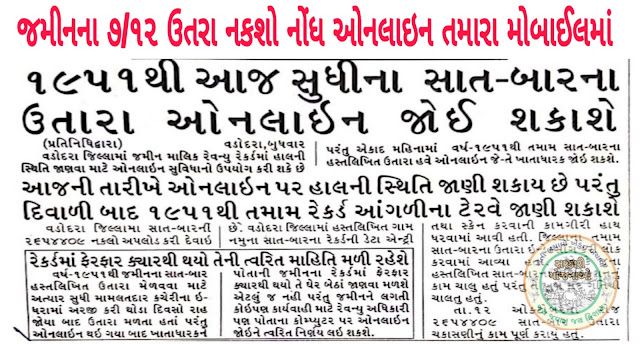 Sanjay Shah. The 7-12 deduction, which is considered to be the main source of land revenue in Vadodara, has now been differentiated. This is the first time in more than three years since the commencement of revenue records that the state government has made changes. In addition to separating the slopes 7 and 12, land maps will also be given along with ownership right in village sample number 3. Full details of the history of any land are contained in the extract of Village Sample No. 7-12 and in the Charter of Village Sample No. 2. This extract, which is very important for the revenue record, is being updated from time to time by the State Government to ensure that it is not tampered with. Under which all these documentary records which were earlier in the possession of Talati according to the revenue area of ​​the land have been taken under the control of Mamlatdar from there and computerized since 2009. After which now all the village sample number 3 notes from 181 to 2006 are being scanned and computerized with the help of special software. With this process, work has been started in the direction of showing the details of land ownership by separating the village sample number 7-12 and now showing the land map in the extract of village sample number 4. As a part of which, the extracts of 7 and 12 of all the villages of the city and district have now been separated. This is the first time in a long time since the commencement of land revenue records in the last three years.

Village Sample No. 2 shows the survey number of the land of that village or area and its type of authority. In which the effect of any change in the right of ownership along with the area of ​​land is also seen. The note number of this change is found in village sample 3. While the details of the calculation with the right of ownership and the effect of other government orders or other changes are seen in the second right. What is the transcript of village sample number 12 ..? Earlier, in the lower part of Village Sample No. 4, in Village Sample No. 12, the water sheet i.e. the details of the cultivation done every year and its crop were shown. But now in the new system the village sample number 12 is separated and the land number, the account number of the owner, the area, the names of the occupants and the details of the crop done in the field and the area of ​​the crop are also shown. All lands

will be re-surveyed by GPS system. Currently land maps were prepared during the British rule. The government has decided to re-survey all the lands. For which the new map prepared by re-surveying on the basis of GPS system will be attached to the village sample number 4. Citizens now have to pay Rs. If extracts of 5 and 12 are given simultaneously,

so far this copy is only Rs. 9 was given. But now that the two extracts have been separated, it costs Rs. ૫ Will have to pay separately. Thousands of citizens in the city and district were given Rs. 9 has to be followed. The state government has issued a tender and the survey work of all the lands in the city and district will be started soon. The work which is to be done by GPS method has been started by the state government and the tender has been issued.
Share on Facebook
Share on Twitter
Share on Google+
Share on LinkedIn