Home » Uncategories » Breaking News: Schools in the state will not open till Diwali, the decision will be taken based on the condition of Corona after Diwali

Breaking News: Schools in the state will not open till Diwali, the decision will be taken based on the condition of Corona after Diwali

Join Telegram Channel
Sponsored Ads
The Central Government has announced the Standard Operating Procedure (SOP) for reopening schools and colleges closed due to the Corona virus epidemic. According to the new guideline, the school is allowed to open from September 21 with conditions for students from standard 9 to standard 12. However, whether students go to school or not will depend on them.

Smart Image Resizer for your Android device is a utility app that lets you resize the image by selecting the right resolution. Photo Resizer is a free application designed to help you resize images quickly and conveniently (easily). Picture Resizer performs one simple task like resizing the image in a fast and easy-to-use way. This picture resizer maintains the picture aspect ratio by providing a resolution list based on camera resolution. Photo Resizer helps you resize photos before posting them on Instagram, Facebook, Twitter, Pinterest, Reddit, Tumblr, Google+, VKontakte, KakaoTalk, etc.

According to the new guideline, it will be mandatory to have a distance of at least 6 feet between the students in the school. Similarly, wearing a face cover or mask will also be mandatory. While schools in the containment zone will not be allowed to open.

The SOP announced by the Union Ministry of Health for re-opening for students from Std 9 to 12 states that the approval for online / distance learning will remain the same.

The school may call a maximum of 50 per cent teaching and non-teaching staff for online teaching / tele-counseling and other related work. Similarly, students from 9th to 12th standard are also allowed to go to school if they want to be guided by their teachers. However, the student will need to get the written consent of his parents or other relatives. In addition, students will have the option of online teaching. 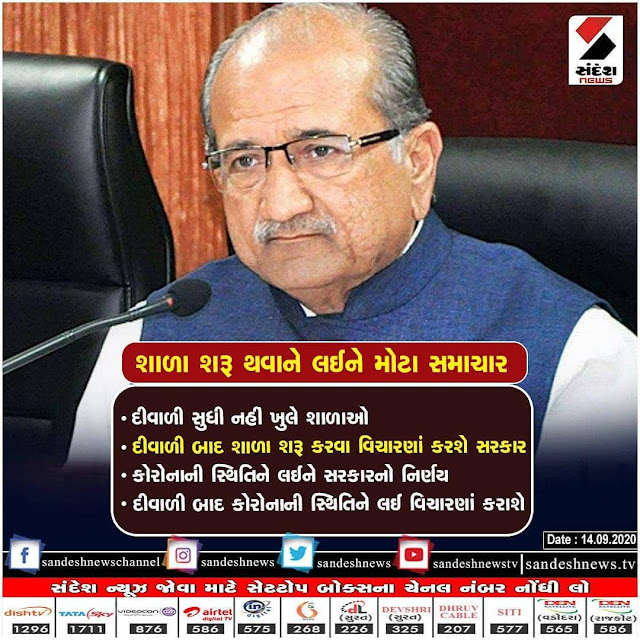 According to the published guidelines, schools will arrange seating for students from class to lab in such a way that a distance of at least 6 feet is maintained between them. The ban on activities such as gathering students, assembly halls and sports will remain in place, as it risks spreading the transition. In addition to the state helpline number at the school, the number of local health officials will also be disclosed so that they can be contacted in case of any emergency.

5 Responses to "Breaking News: Schools in the state will not open till Diwali, the decision will be taken based on the condition of Corona after Diwali"