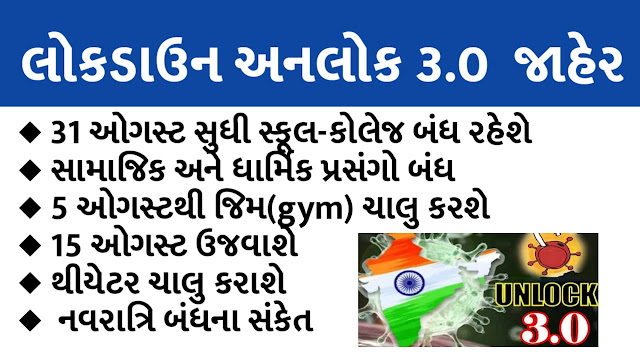 The Central Government has issued guidelines for Unlock-3. The guidelines issued by the Home Ministry have allowed the opening of the gym from August 5. The government has also lifted the night curfew. Ban on metro, rail and cinema will continue. The government has said that Independence Day programs will be held with social distance. In addition other health protocols must be followed, such as wearing a mask.

The Home Ministry informed that after extensive discussions with the States and Union Territories, it has been decided that schools, colleges and coaching institutes will remain closed till August 31.

The Union Home Ministry has issued guidelines for Unlock 3. Under this, night curfew will no longer be applicable. Schools, colleges, public events will remain closed as before. Metro service can be started.

According to the guidelines, metro rails, cinema halls, swimming pools, amusement parks, theaters, bars, auditoriums, assembly halls can be opened except in the containment zones (where there are more cases of corona).

Restrictions on movement of people during night (Night curfew) are removed.

Yoga institutes and gymnasiums are going to be allowed to open from August 5, 2020. during this regard, Standard procedure (SOP) are going to be issued by the Ministry of Health & Family Welfare (MoHFW) for ensuring social distancing and to contain the spread of COVID-19.

Independence Day functions are going to be allowed with social distancing and by following other health protocols, e.g., wearing of masks etc. during this regard instructions issued by MHA on 21.07.2020 shall be followed.

After extensive consultation with States and UTs, it's been decided that schools, colleges and training institutions will remain closed till August 31, 2020.