Home » Uncategories » How to Check and Remove China Apps

How to Check and Remove China Apps

Join Telegram Channel
it is very easy to find Chinese apps, This tool lists all Chinese apps.You can easily remove selected apps. Chinese apps are not secure you can scan and select Apps that you want to uninstall, and click ‘Delete’ button to uninstall them. 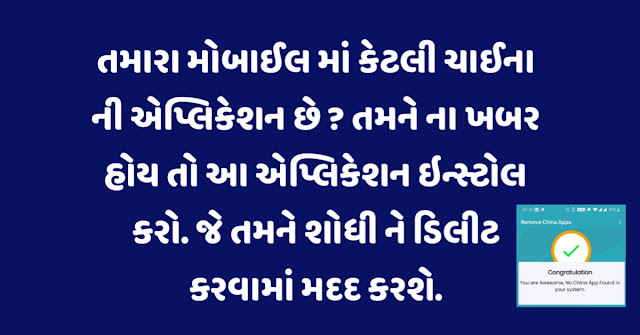 A set of Indian engineers have developed an app that detects apps made in china and given a very simple UI to remove them.
In a span of 2 hours Remove China Apps the apps got 5300+ reviews. Considering the exponential growth in play store reviews, TDH team told that 20,000+ app installations are happening every 3 minutes

“China’s biggest fear today is its own people, its 140 crore population, who are treated like bonded labourers, without any human rights, and who make the government rich with their labour. After coronavirus, factories have been shut, exports are hit, there is rising unemployment. People are angry. If 130 crore people of our country boycott Made in China goods and start a movement, it will have a worldwide effect. It will also help our own industry, our own workers.” he said. He has uploaded 7 minutes YouTube video which you can see at the end of the article.

How to use Remove China Apps?

2. Open the Apps after installation

4. Click on bin icon in the right to remove the specific app

Why apps made in china aren’t trusted?

1. China sensors anti china, anti platform videos
Unlike youtube apps which allows any critic videos, Apps like tik-tok doesn’t give any reach to anti tik tok videos. It’s called censoring and china has been famous for that.

2. Government of china can access any information about users 24×7
The government of China has regulations with every private, public firm, and access to their centralized database. The government can search, filter, or aggregate data on mass scale which makes it a national issue. US Government has banned any TikTok usage in government authority and in their family for the same reason.

0 Response to "How to Check and Remove China Apps"