Join Telegram Channel
Farmers worried about locusts in Gujarat at the time of Koro's transition, Agriculture Department officials were alerted, locust swarms have flown for the fourth time in a year. Locust

swarms have started invading Gujarat once again. Efforts to stop the locusts from coming from Pakistan have been in vain, as the entire administration is now operating in compliance with the Corona transition and lockdown situation. North Gujarat has come under the influence of locusts. 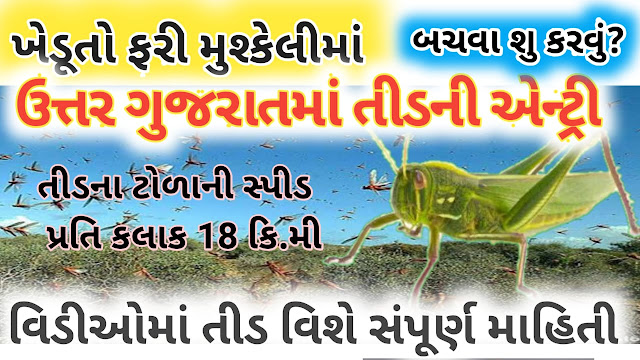 Asked where the locust swarms came from, an official of Rai's agriculture department said they come to Gujarat from Pakistan via Rajasthan and cause damage to the farm. Although the number of locusts is low this time so there is no possibility of further damage, our Agriculture Department teams are taking precautionary measures in North Gujarat.


Here: Tutorial Video
The invading locusts live in the Thar Desert of Rajasthan and the Tharpakar Desert of Pakistan. Desert locusts can fly long distances and move quickly from one place to another. Locusts are voracious and long-range insects that live in groups. A total of 10 species of locusts have been recorded in the world, out of which four species are found in India, namely, the locust, the Bombay locust, the migratory locust and the tree locust. In which the most damage is done by Ranatid.

Remedies for Tidanum: Click here
This time the locust swarms are small in number so it does not cause much damage but the administration has started preparations for precautionary measures. Mithavi Charan village in Banaskantha district is thus placed in a buffer zone due to the transition of Koro so farmers are given a slight exemption despite the ban on evacuation.
Share on Facebook
Share on Twitter
Share on Google+
Share on LinkedIn